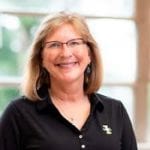 Michelle (Shelley) McGuire received her bachelor’s in biology from the University of Illinois (1986), a master’s in nutritional sciences from the University of Illinois (1988) and doctorate in human nutrition from Cornell University (1994). Her research focuses primarily on understanding better how maternal diet and nutritional status influence human milk composition and maternal/infant health during breastfeeding. Of particular interest to her research is understanding the importance of dietary lipids to maternal and infant health.

Shelley also has a long-standing interest in understanding the physiologic mechanisms driving the return of ovulatory function during the postpartum period. Recently, Shelley and her colleagues Mark McGuire and Janet Williams (both at the University of Idaho) have become intrigued by the presence and variability of bacteria in human milk (known as the human milk microbiome). As an extension, they are also interested in how the milk microbiome impacts short- and long-term infant health both in the U.S. and globally. Shelley’s research has been funded by a variety of groups including the U.S. Department of Agriculture, National Institutes of Health, National Science Foundation, Bill and Melinda Gates Foundation and commodity groups such as the National Cattlemen’s Beef Association and the Idaho Dairy Commission. McGuire is also passionately committed to bettering human health through the provision of user-friendly, high-quality, evidence-based nutrition information to the press and public.

Determining the Relationship Between the Microbiome of Human Milk & Infant Faeces 9:30 am

We use cookies to ensure that we give you the best experience on our website. If you continue to use this site we will assume that you are happy with it.Ok